Sticking with the Lower Ground Floor, we emerged from the phone shops into a world of children’s specialists.  Build-a-Bear, Lego and upscale clothes stores like Polarn O Pyret and Atelier de Courcelles are already in evidence; Mamas & Papas will follow on a higher level.  (Observation: upmarket children’s stores have foreign names.  JoJo Maman Bébé would be another.  Whereas the mass market has clunkier, English names.)

So, The Entertainer.  The six-day toyshop is a staple in many shopping centres, and this was a pretty standard store – reasonably fully stocked, but many popular brands had been allocated limited space or were unstocked, and generic product took their place.  Putting all the rollerblades in “Boys Toys”, including the pink ones, summed up a rather formulaic experience; staff stayed firmly behind the tills (including those wearing “can I help you?” sashes), which rather defeats the experiential joy of a good toyshop.  We left, feeling a bit flat, and crossed the mall to Mothercare.  Here, shopfit quality has been lifted (attractive light woods and pastels), and roomsets show off nursery furniture to advantage, but again, there were no staff on the sales floor.  The customer may have sought assistance with car seats or buggies, or wanted some show-and-tell in the curiously unbranded Early Learning section at the rear, but all staff were again coralled behind the tills.

Retailing isn’t easy at the moment (you may have noticed), but it does seem curious to under-staff your most important new stores within a week of opening.  If you can’t throw some payroll hours at converting new customers to your brand, and you don’t have a high-concept store design or radical new products, how are you going to get your store to stand out from 300 others at Westfield?

Pausing to admire the publishers’ pack-shots on the Foyles hoarding (opening next month), we headed into one of Westfield’s biggest draws, the John Lewis store.  And our initial impressions were… oh dear.  This has all gone badly wrong.

The Partnership has built a large store that feels small.  Perhaps the escalator cut-out is too big, but where M&S is spacious, JLP is cramped and tight, particularly on Lower Ground, where the juxtaposition of menswear to the right and kitchenware to the left feels absurd.  The shopfloor has been segmented using fretworked screens and other devices which only serve to further cramp the feel of the place – the aisles are tight, and the product juxtapositions frankly bizarre.  And the severed hands hanging from the ceiling are downright creepy. 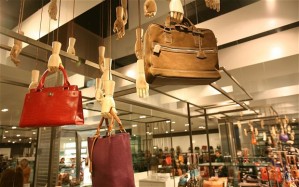 Things improve on what Westfield calls the Ground Floor, and JLP calls First (women’s fashion, accessories and beauty), and things are as they should be here and on First/Second (furnishings and fabrics).  The top floor is strong, with the best toy offer we’d seen all day – at last, someone carrying all the brands, facing the plush towards the customer, and keeping the offer clear.  But the top floor also contains a big fat compromise of a space, which may explain why the bottom floor is such a dogs’ dinner.  A huge London 2012 shop sells every imaginable take on Olympic mascots and logos, complete with a viewing gallery offering a sensational panorama of the Olympic park.  This must take up over a quarter of the total retail space on the floor, so you have to conclude that several categories will exit the lowest level and move to the top in due course – but not until autumn 2012. 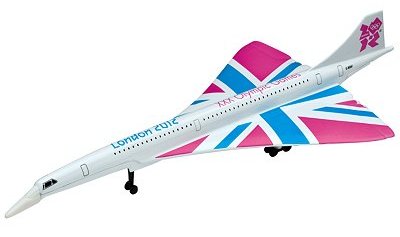 An aside – isn’t it about time we stopped treating the 1960s as the pinnacle of British grooviness?  Routemaster buses, Concordes and original Minis barely exist in modern London, and are surely irrelevant to our image of a 21st century cosmopolitan capital city.  At least red phones boxes and beefeaters still exist, but we need better, more modern icons.

Back to the shops, but before we leave John Lewis (after a reliable lunch at The Place To Eat) I should note that customer service was as exemplary as ever.  There’s nothing unfixable about this store, but it wasn’t delivering the experience we’d come to expect.

What makes John Lewis more profoundly disappointing is the quality of Marks & Spencer.  M&S has created a proper department store in a free-standing building that provides a sense of occasion on every level.  I haven’t seen the prototype fit at Kensington High Street, but this was a classy, well laid-out and very shoppable offer.  Menswear (complete with a tailor running up alterations, and much clearer definition for brands like Blue Harbour) was simply the best I’ve ever seen in an M&S; home and furnishing were strong, and a delightful top-floor cafe offered treats that the customer could also buy from the Foodhall.  I’ve written recently about the challenging legacy of old stores that M&S has to deal with; by contrast, in a brand new space, they are creating some of the best retailing in the UK.

Clinton’s has made a bold attempt to update its image.  The orange and purple trialled in St Albans is much in evidence, but some of the shopfitting was cheap, and the juxtaposition between a funkier feel and some of the granny-targeted merchandise was jarring.  Service was excellent, though; Clinton has too many shops, many of them desperately old and tired, but there’s a place afor a mid-market gift/card chain, and one hopes that the new management team can move the business forward.

Timothy Melgund at Paperchase has often asserted he runs a fashion brand, rather than a stationery shop, and the new store is on the prime fashion pitch, beautifully presented and ideally sized.  Cards can be generic things, and Clinton/Scribbler/WHS are subject to constant price comparisons with the supermarkets; Paperchase overlays some quality and product uniqueness, and lifts itself well clear of the fray.

A few years ago, a vast HMV would have taken dominant space in a new mall like Westfield.  Not any more – a smaller unit on a side aisle has to suffice.  The CD/DVD offer is what it is, slowly and inexorably declining (though it doesn’t look as though anyone has told the buyers – stock density is extreme); games appear to have been circumscribed, and the technology offer – pitched to save the business – hasn’t noticeably moved on from the Islington protoptype.  This was very disappointing; Apple, Currys/PC World Black, and the upper end phone stores were displaying better tech on better fixtures, with dangly cables under control, and staff to explain and sell.  HMV offers MP3 players, boomboxes (archaic term, sorry) and accessories, but it’s hard to see for whom this store would be first choice for this product.  Execution of these ranges will have to be more stimulating if they’re to offer any real hope to HMV.

Next time I visit Westfield, I look forward to seeing more stores trading – there are still a lot of “under constructions” and “to-be-lets”.  I’ll rope in a teenage daughter and we’ll take a proper look at fashion.  However, I also wanted to understand where the customers were coming from.  Great play has been made of Stratford’s connectedness – two tube lines, Overground, DLR, national rail and direct links to the Continent, plus an adjacent bus station.  You can reach Westfield directly from any of these, but plenty of people are entering on foot from “old” Stratford. 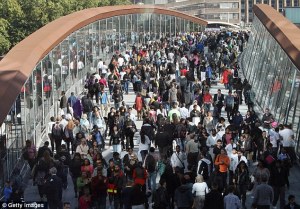 Old Stratford compares very badly to Westfield and the Olympic Park, reminding the visitor of how deprived parts of our capital can be.  A one-way system encircles the old Stratford shopping centre, so that most foot traffic passes through a dingy mall and across knackered highways to reach Westfield.  Display boards promote upcoming public realm improvements (clouds on sticks!), but it is hard to see how this sort of surface flim-flam can improve the residential and commercial environment.

Stratford’s old mall is big, dating back to 1970s planning models that brought whole town centres under one roof (think Camberley, Eastleigh).  The interior is dark and crowded, stinks of cheap disinfectant, and is full of the crowds you can see on the bridge above, pushing their way through and past the old shopping experience and on to Westfield.

Massive regeneration will surely help the area, creating jobs and housing.  A masterplan was signed off by Newham Council at the end of last year – just five years after the successful Olympic bid.  Serious thought needs to be given to local shopping provision – presumably the duplicate chains in the old scheme will be seeking to exit, leaving market stalls and pound shops behind them.  A decent, modern supermarket would be a good start, but at present, the contrast between Westfield and its immediate surroundings is too stark.  The number of shoppers in Westfield suggests long-term success (though, as I indicated in Part One, the Olympics need to come and go before retailers will have an objective picture of their performance).  To the south, Canary Wharf’s wealth has largely failed to trickle out to its immediate surroundings, beyond the gated apartments and highways.  A scheme like Bluewater – turn left off the M25 and head for the quarry – has little integration with Dartford and Gravesend.  Westfield and Stratford City, on the other hand, are in the heart of the deprived East End, and can – must – do better.