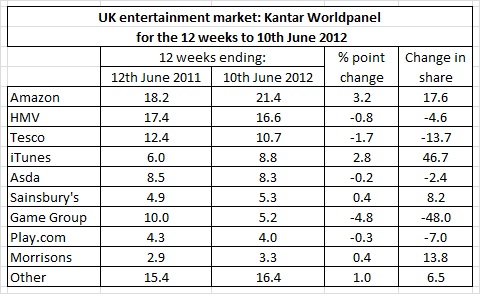 Retail Week, The Grocer, The Bookseller and others have all reviewed Kantar Worldpanel‘s latest analysis of the UK entertainment market, which focuses on the 12 weeks through to mid-June.

Despite all this coverage, there is a some vagueness as to what is and isn’t included in their definition of entertainment.  As far as I can tell, however, we are looking at:

– CDs (and other recorded music)

It looks as “downloads” includes ebooks, but the sector definition as a whole doesn’t include pbooks.

It’s unclear how broadly downloads are defined – all apps, or just those that have some kinship to traditional formats?  If so, that would be a “yes” to Angry Birds, but a “no” to business apps.

It’s also unclear whether all subsidiaries are properly accounted for – so, for instance, are LoveFilm downloads included in Amazon total?

Still, whatever the definition, it all makes for a good story.  The changes in percentage point share are pretty predictable – Amazon up, HMV down, Game Group – with multiple store closures following administration – well down.

But I am interested in the scale of some of the gains.  Of course, the overall size of the market fluctuates, but for iTunes to move from 6.0% to 8.8% represents an increase in penetration of nearly 50%.  And, LoveFilm or not, Amazon’s growth continues powerfully, with no reason to assume it will slow down in the foreseeable future.

Tesco’s tribulations and Sainsbury’s progress are both graphically illustrated here – indeed, if these numbers are a microcosm of current trading at Tesco, that would be a concern.

That the “Others” are growing their share suggests diversity in the market.  I wonder who they might be?